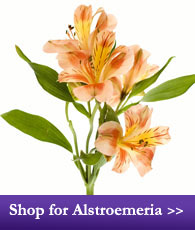 All about Alstroemeria or the Peruvian Lily

Also known as a Peruvian lily or the lily of the Incas, the alstroemeria has a rich history. The Swedish baron Clas Alströmer discovered alstroemeria in the while traveling in South America in the mid-18th century. He brought it back to Sweden to study, and the flower was named in his honor. Today it is a popular flower due to its delicate petals and bright, beautiful colors thanks to years of cultivation and the development of hybrid flowers.

Description of the Alstroemeria Flower

Over 120 species of alstroemeria can be found across South America, primarily in central Chile and in eastern Brazil. It is a perennial, returning one growing season after another. The alstroemeria plant features a thin stem and lots of foliage, and the root system is designed to store water, keeping the plant healthy even in periods of dry weather. The flower of the alstroemeria plant features six petals, usually with four of them being broad and showy. Colors include salmon, red, purple, white, and more, with most flowers being variegated and boasting two or more shades. The leaves twist up from the base so what appears to be an upper leaf is actually the lower leaf. This is a characteristic unique to the alstroemeria and few other flower species. It gives the plant a full, leafy look that is at once intriguing and chaotic.

How to Plant the Alstroemeria Flower

Since its discovery in the 18th century, the alstroemeria has been hybridized repeatedly. Today, there are over 190 different hybrids being grown in gardens, greenhouses, and nurseries around the world. Their bright colors add a fanciful backdrop to any garden or flower bed. They are not difficult to grow and require little attention. In the winter, they lie dormant, only to return on their own for the next growing season. Alstroemeria requires ample indirect sunlight, moderate temperatures, and lots of water. If planted in direct sunlight, the plants will likely lose water too quickly and eventually die. When planted outside in close proximity with one another, they can give the impression that they are all one lush shrub or bush.

Uses for the Alstroemeria Flower

Alstroemeria are appreciated for their vivid colors and delicate texture, which is why it is found over and over again in bridal bouquets, flower arrangements, and even corsages and boutonnieres. Cut flowers can last in a vase for almost two full weeks, making it an ideal flower to include in floral arrangements and centerpieces. They are excellent accent flowers, but arrangements made up only of alstroemeria blooms can be quite striking as well, as the leaves give the arrangement texture and volume.