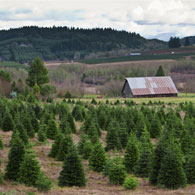 White Spruce, otherwise known as Picea glauca, is a member of the spruce family that is commonly found in North America, particularly in central Alaska, Montana, Michigan and Maine. This dwarf Alberta Spruce, a cultivated variety of the White Spruce, is a common favorite to gardeners. The bigger, non-cultivars are those used for Christmas trees in the home during the yuletide seasons.

The Norway Spruce, or Picea abies, a member of the large family of spruces much like the White spruce, is a huge evergreen tree commonly found in Europe, areas of Norway and Poland, and in the mountains of central Europe. Like the White spruce, it is a common favorite as household Christmas trees. These locally cultivated and well-cared for Christmas trees are a household fixture in most Canadian homes during the yuletide season, and continue to be a well-established tradition across the country.