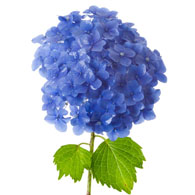 All About the Hydrangea Flower

The hydrangea, also known as the Hortensia is an exceptionally versatile flower that is used from everything from bouquets and exquisite flower arrangements to a beautiful garden flower. People have been known to dry them due to their unusual leafage. However, there are some unusual connotations attached to the flower – so beware of how you use it! It can be used to say “thank you”, but the meaning of the flower itself implies heartlessness and rigidity. In Asia, pink hydrangeas have come to mean, “You are the beat of my heart” probably due to the size and color of the flower somewhat resembling a heart.

Description of the Hydrangea Flower

The Hydrangea is an ornamental shrub or climbing plant that generally blooms from early spring to late autumn, and can come in a variety of colors. It is also a popular houseplant, as they are fairly easy to grow as long as the soil is the right acidity. It is part of a genus of around 70-75 species native to Asia and the Americas, and among these you find shrubs between two and eight feet tall to vine-like plants that may reach anything up to 90 feet tall. The flower grows in what is known as “flower heads” containing two types of flower – small fertile flowers and large infertile flowers.

Due to its size and fullness, the hydrangea is an ideal flower for things like flower arranging and creating bouquets. They have been used for table centerpieces as they can be quite striking given their large size and vibrant colors. Many people also use them for landscaping, as they are fairly low maintenance once they are growing, only needing pruning to keep them in good condition yet they look beautiful once they are in bloom. They can also be grown in the perennial borders of your yard or garden, because new, smaller species have been developed

The flower comes in a huge variety of colors – the color of the flower will depend on the acidity of the soil. They can have quite a long growing season depending on the weather and conditions, although it generally blooms in the late summer season. They are ornamental plants and are on the most part easy to grow. They have been described as fairly easy to root, and some people have been able to root them in water, although this can be a tricky method to master.

You can place cuttings in soil under plastic in bright light (but never in the sun, as this will cook them due to the plastic) and they will root quite easily. You can also use the cup method – this involves placing a cutting in a medium Styrofoam cup and placing a larger plastic cup over it to create a mini-greenhouse effect. Hydrangeas can be fairly toxic if eaten, although in Japan the flower is used to make tea known as “sweet tea”. When growing the hydrangea, it is important that you prune it regularly otherwise the weight of the flowers can cause your shrub to sag significantly.