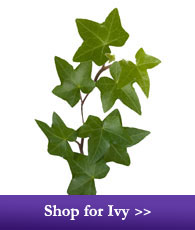 All About the Ivy Plant

Ivy can be seen all over the place – in woods and forests, covering the ground and wrapping itself around trees, climbing up the walls of old houses, and houses that want to look old and quaint. Ivy, when spoken of without any qualifying words, generally refers to the Hedera, a genus of around 12-15 different species and is found in most places in the world in one variety or another. It is especially common in Europe, Northern Africa and across of Asia. It is reported to symbolize friendship, fidelity and affection. Generally the plant consists of both adult and juvenile leaves, and at some point through the year it also sprouts berries.

Description of the Ivy Plant

Ivy is easy to grow – you leave it to itself and it will climb up or across whatever is closest at hand. While it can be an attractive plant, care should also be taken as it can be very destructive. Once it wraps itself around a tree, it can quickly cause the tree to die. The same can be said with houses – although obviously the house does not die, but the ivy can eat away at the mortar and cement in a house’s brickwork and cause a lot of damage. The plant has also been known to cause damage to windows and windowpanes. Damage from ivy is more extensive in North America than in Europe, where there are pests to control its vigor.

Once you plant ivy, it will grow more or less on its own and should be pruned and kept under strict control to stop it from taking over. People use it as a fascia for houses or fences most of the time, but it has also been used for decorative purposes inside. Over past decades, a rise in popularity for plastic ivy to decorate the insides of houses or churches has occurred, although this is diminishing now. If you are growing house ivy, you must ensure that it is getting the proper amount of light and water, or the leaves may turn a yellow/brown color.

If your plant is getting these things and still dying, you should attempt to re-pot it in a larger container with a high percentage of compost. Don’t over-water your plant – if you put your finger part way into the pot and it feels cool and slightly damp, your plant is fine. Once the soil is too hard to put your finger into, it is definitely time to re-pot and give your ivy a new home!

Ivy can grow to extraordinary heights from 5cm to 90 feet. It is an evergreen plant and is used by many people to attract wildlife to a certain area, or else to hide unsightly walls. Frank Lloyd White reportedly said that, “Doctors bury their mistakes; architects cover theirs with ivy.” Their leaves can differ in color, and some species of ivy can be poisonous. This should be determined by becoming familiar with the differences in leafage of poisonous species. The well-known “poison ivy” should not be associated with ivy at all – it is not a real species of ivy, but due looking similar to the ivy plant, it has been dubbed thus. Care should be taken to avoid “poison ivy” as it can cause a severe and painful rash to anyone who touches it.