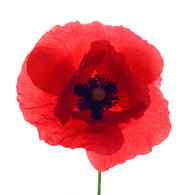 All About the Poppy Flower

Today, the poppy is seen as a symbol of remembrance for the men and women who died during World Wars I and II. The Royal British Legion use it to this day, and every November you will see many people adorning red paper poppies in memory of those who gave their lives for our freedom. The reason for the poppy is that it was supposedly the first flower to bloom on a battlefield where hundreds of people had died. Prior to the twentieth century, however, the poppy was most famous for its opiate properties and was used in Asia to produce opium. If one inadvertently ingests too many poppy seeds, he or she can fail a drugs test due to the opiates found in the seeds! The flower can symbolize oblivion and also imagination.

Description of the Poppy Flower

Poppies belong to the genera of Papaveracae along with around 125-130 other species. It generally has four to six flowers and can be found in many different colors with many different petal markings, the most popular of these being red. The pollen is also generally different colors. The pollen of Asian poppies tends to be dark blue in color, whereas the field poppy may have grey pollen. It is important to note that poppies can be abused by people who want to use them to make hallucinogenic drugs. Opium is a banned substance because it is so dangerous to the human health. These are some of the most talked about plants around the world. They often get a bad rap for the extra attention that is paid on them for their use in the drug community.

Uses for the Poppy Flower

The main use for the poppy throughout history has been to obtain drugs from it. However, nowadays the seeds are often used in baking and cooking, and poppy seed oil is used for culinary purposes. The opium poppy’s production and use is monitored worldwide as a control against drug abuse. Poppies are a pretty and decorative flower, and so look great in window boxes and other floral arrangements, as well as in the perennial borders of your garden. For those who happen to like the flower they can make a nice addition to a bouquet as well. They aren’t as expensive as some flowers so are easy to give as a gift. If you’re looking for something unique try a poppy.

The petals begin their growth being crumpled inside the bud and slowly straighten out as the flower blooms. It is important to ensure that you have the right sort of soil to grow the poppies as anything either too acidic or too alkaline will quickly destroy your seedlings or flowers and render them lifeless. Ensure that your soil has good drainage, and that there is enough light getting to your flowerbeds. To be sure you will want to make sure to feed or fertilize your plant on a regular basis if you want good steady growth and a healthy blooming plant.