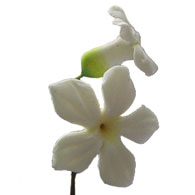 All About the Stephanotis Flower

“Stephanotis” is in fact a genus of flowering plants that derives its name from the Greek words for crown and ear. The genus consists of around 5-15 different species of plant that are all evergreen in nature. They are native to Africa, and are grown for their strongly perfumed flowers. The most well-known of the Stephanotis genus is the Madagascar Jasmine (Stephanotis floribunda). It is usually white in color and has very distinctive petals – the flower itself is almost a star shape in appearance. It is a popular flower among brides and wedding planners due to its pretty delicacy, as it adds something different to a bouquet of roses for instance. A bouquet of Stephanotis flowers alone can be exceptionally striking, and due to its meaning being one of happiness in marriage, it is the ideal wedding flower!

Description of the Stephanotis Flower

As we have noted, the Stephanotis is in fact an entire genus of flowers and gets its name from the Greek words for crown and ear. This, it has been suggested, is due to the shape and nature of the flower – it’s somewhat star-like leaves can also look like crowns. It has a woody vine-like stem, and like ivy is a climbing flower, but unlike ivy it is a primarily tropical plant. The flowering plants can grow up to 10 feet tall, with flowers that are generally white and contain 5 petals.

The Stephanotis is a popular houseplant because of its strong aroma, but as previously noted, it is important that the right conditions exist for the plant to be cultivated successfully. It will thrive in a warm room that gets plenty of light, or else in a warm conservatory. The plant should not be subjected to any sudden changes in temperature, or it will die. If you want Stephanotis for your bridal bouquet, it’s important to understand that they can be costly as they are not native to Western countries and have to be grown under special and specific conditions.

The Stephanotis flowers from around May to October. The Madagascar Jasmine is grown in greenhouses and tropical hothouses for use in wedding bouquets in the United States. If you are going to grow any one of the Stephanotis species of plant, you should plant it near a tree or something that the flower can climb. This will encourage growth and help you get the best of the flower. It can be a very difficult plant to grow, as it hates sudden changes in temperature or climate.

For this reason, extreme care must be taken – it needs a constant cool climate in winter, infections from mealy bug and scale, as they find the plant very attractive. The plant requires a high level of humidity and thrives in a summer temperature of around 21 degrees Celsius, while in the winter it should be kept between 13 and 15 degrees C. It will tolerate a low of 10 degrees, but anything less than that and you will have problems.